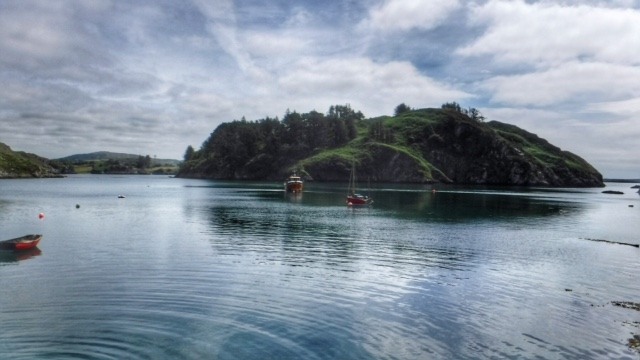 What a difference a day makes, after the misty, foggy Sherkin to Baltimore swim, ( see next blog ) there could not be more of a contrast in the weather. We are swimming half an hour early to catch the tides to go around Bullock Island. I get a lift to Barloge in the boot of a new swimmer Deirdre’s car, who tells she she has just started open water swimming in April.  There is a gang of us going in, a mixture of wetsuits and togs. Ann- Marie decides to go for it without the wetsuit. Although the water looks like glass I am just not brave enough, I am not confident enough if the water is rougher around the back of the island. 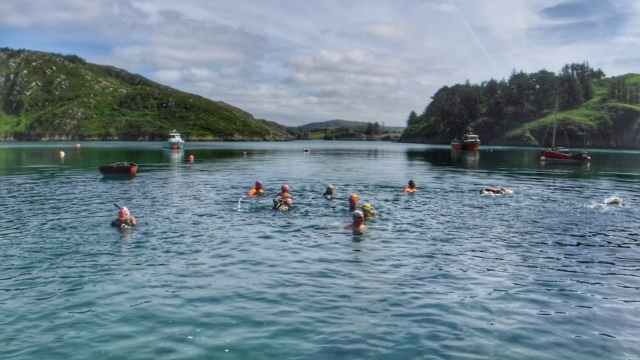 Paul was swimming before we got in and said the water is 15 degrees. It feels gorgeous when we get in but the further we swim on towards the island I feel the temperature drop. 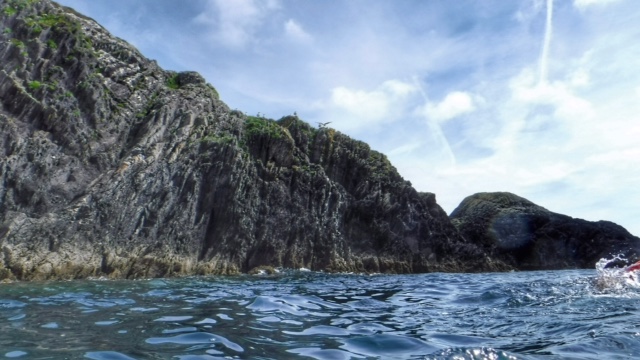 I love the drama of the land as the folds of rocks slips into water at an angle. As the water is way calmer than the last time we swam this I swim much closer to the rocks. 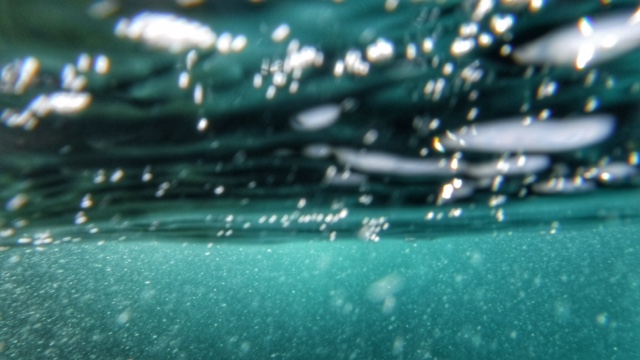 The trouble with taking the photos is I am last in the group, lucky for me everyone waits at the corner. 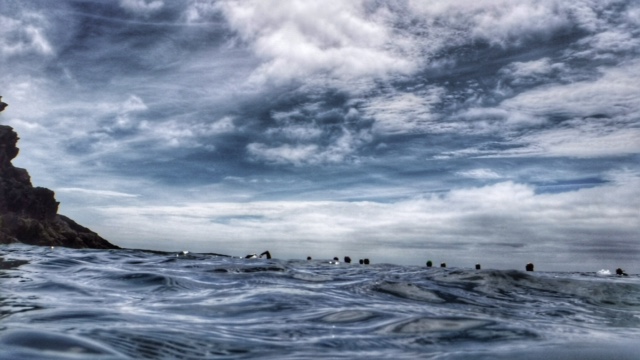 It is so breathtakingly beautiful, the waves only slightly increase, I feel the roll of the water but I do not panic. With the sun beating down and the blue sky it feels like we are on a swimming holiday. 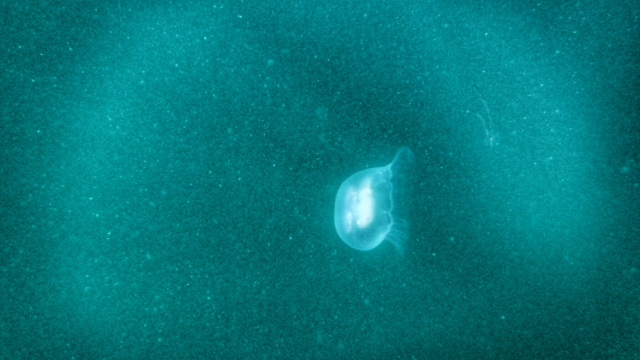 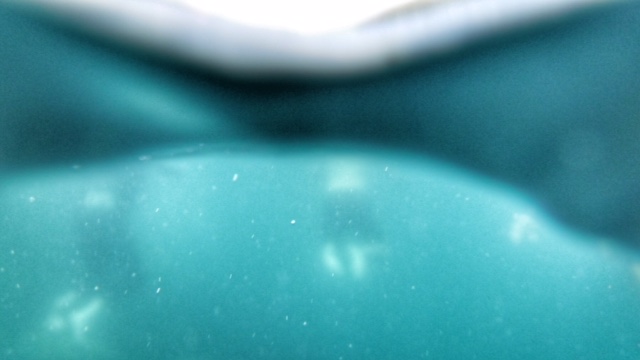 There is as much to see down below as there is above. There seemed to be more jellyfish than the last swim. Nathan later reported as he and Noel swam around Bullock Island a second time, they spotted a medium sized Lion’s mane. I saw a huge Lion’s mane two years ago just before going down the rapids. I had no camera then but the image of the colours, textures and the size of it are still very vivid in my head. 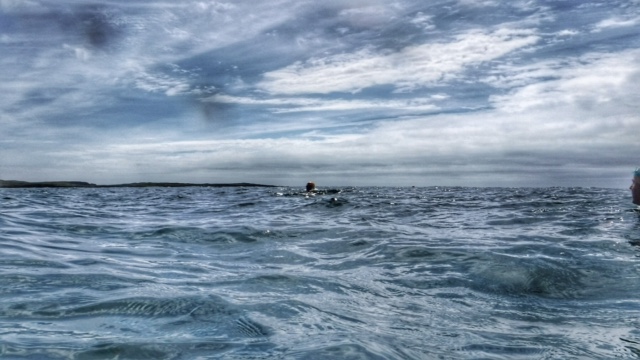 Declan is heading out into the Atlantic. 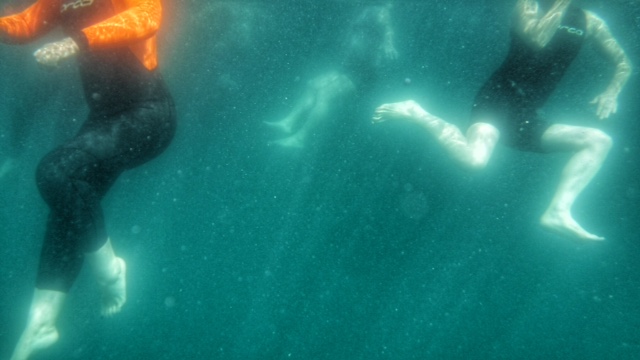 The waiting swimmers, including Anne-Marie not a bother on her. 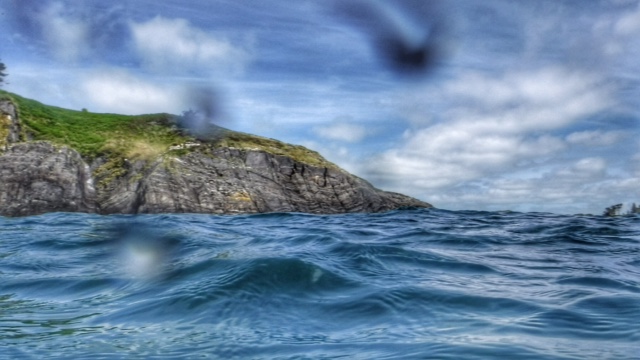 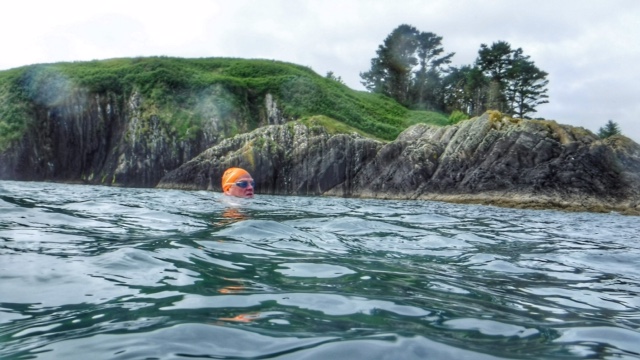 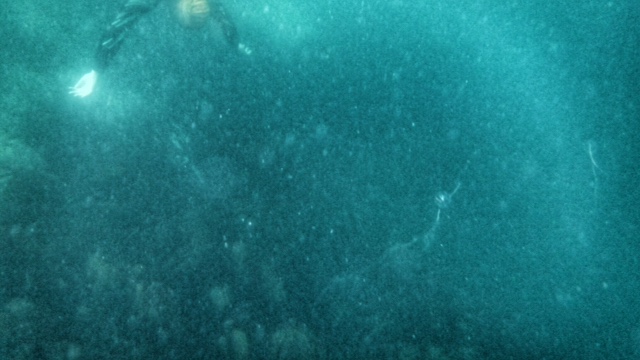 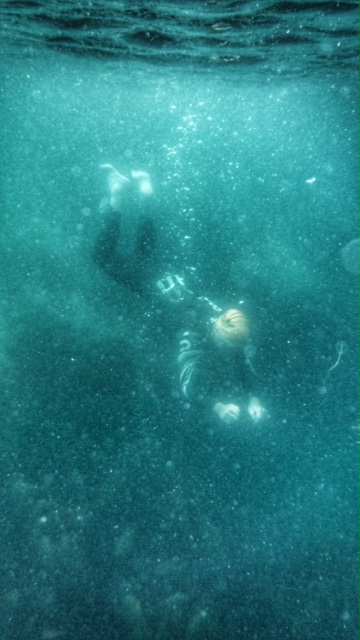 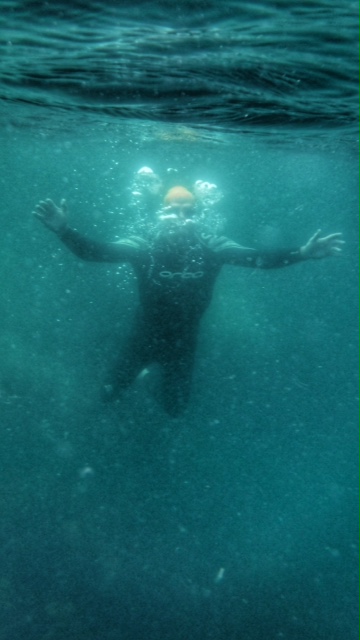 Declan always ready for a bit of craic. 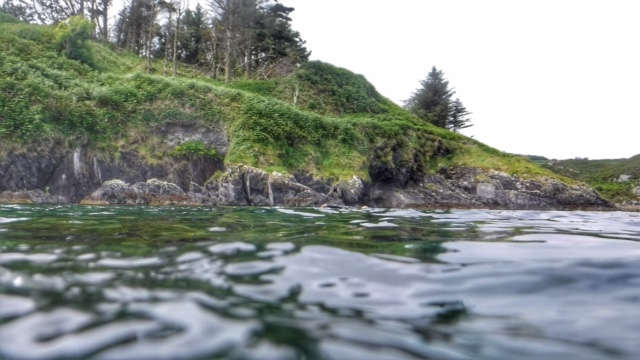 The water calms and there is more to see down below. 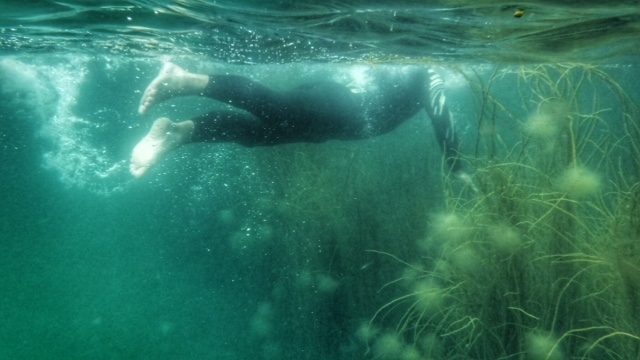 James tells me to go closer to the rocks, so I folow him. 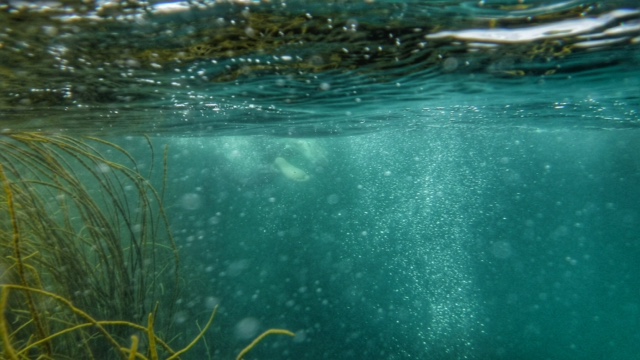 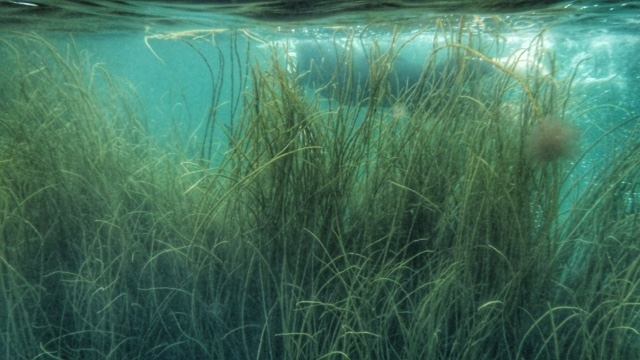 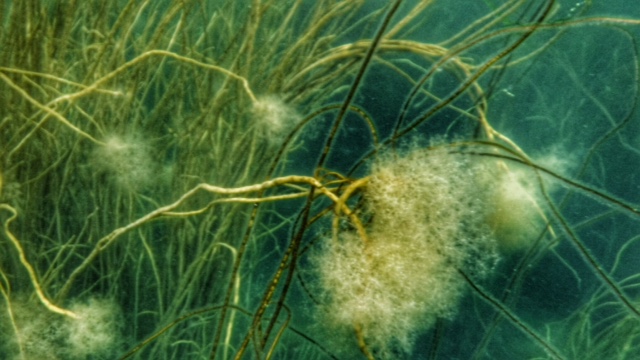 I could stay here it is so interesting, the seaweeds they change as we swim through them. 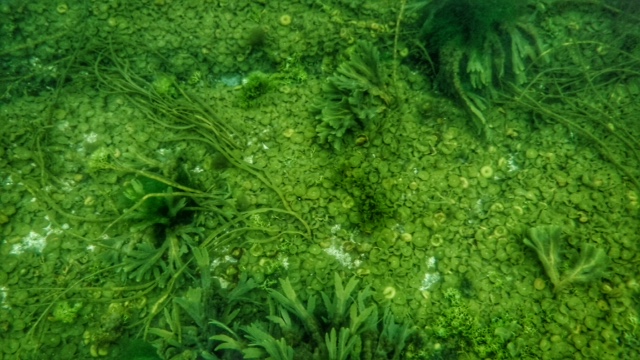 There is a clearing and it’s like gold coins have spilled out from a  treasure chest out onto the bottom. I look up and I am behind again so I swim on. 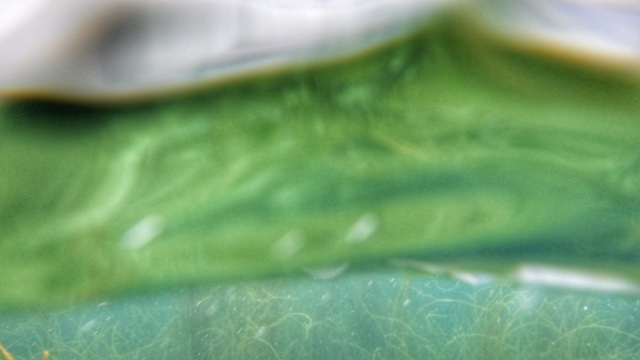 The “Coosh” is shallower than the last time and some swimmers have to get out and walk across. 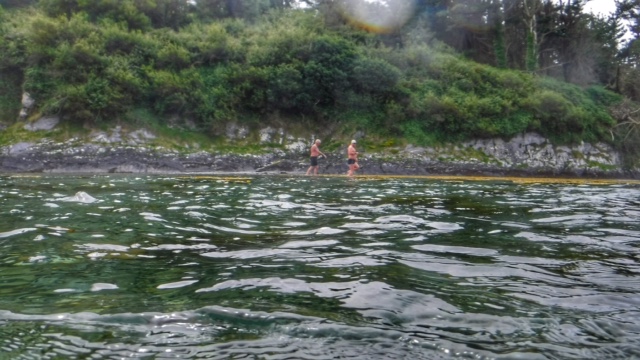 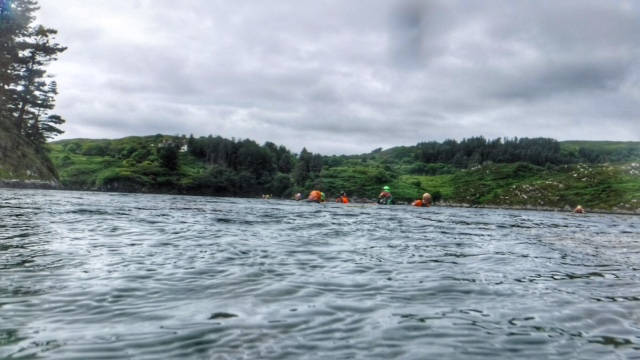 Some swimmers are heading down through the rapids and into Lough Hyne, others going for a second round around the island. I am going back to Barloge with Maria and Anne-Marie. 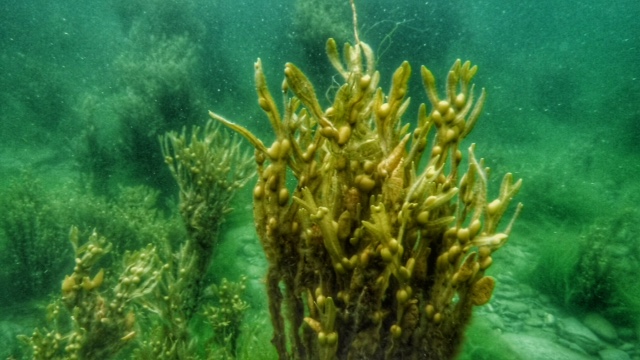 I could just stay here for the afternoon.

Heading into the pier there are boats and ropes to weave around. Congratulations to Anne-Marie, she was thrilled and I am well and truly…. 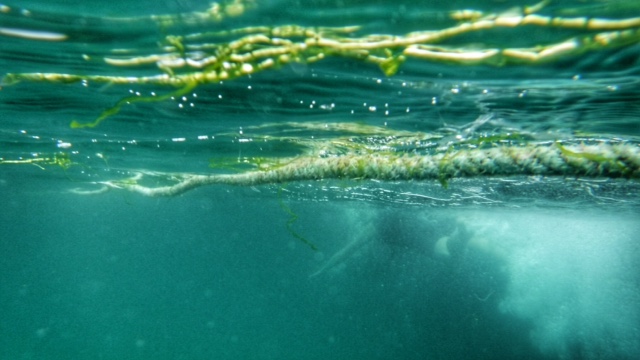 Back at the car park, getting dressed Sean who I was in the car with tells me Deirdre flew past him like a bullet in the water. We find out she was in the Montreal Olympics in 1976. I am so lucky not only to be swimming in Lough Hyne but have such amazing swimmers to swim with. Awe inspiring  Olympic standard, swimmers who keep pushing themselves , and therefore push me, swimmers who look after me, and swimmers who give giving me fantastic visuals. I drive home inspired and feeling very privileged.